Last week, Robinhood had an unlikely savior in the form of the US Securities and Exchange Commission (SEC), following reports the regulator wouldn’t ban payments for order flow. Payments for order flow (PFOF) is a practice that enables retail brokerages like Robinhood to do what they do: Offer commission-free trading.

The news was particularly surprising in that Gary Gensler, the SEC chair, had been repeatedly critical of PFOF since taking the helm at the regulator. Robinhood is perhaps the biggest winner of the SEC’s climbdown from a total ban, although the regulator is continuing to look at ways to limit PFOF.

Here’s why PFOF is so controversial and for Robinhood, why it’s so important.

PFOF is the practice whereby retail brokerages like Robinhood route trade orders from their clients to market makers – like Citadel Securities or Virtu Financial – to execute trades rather than making those trades with the exchanges – i.e. the New York Stock Exchange – directly.

There are a plethora of reasons why these retail brokerages do this. At the outset, executing a high volume of trades is a lot of work: Robinhood has millions of uses, so being able to execute them when its users want (think in milliseconds, rather than minutes and hours) is a pretty tough task.

Market markets like Citadel have spent billions on technology that lets them do precisely this, at scale and at rapid pace. And because they’ve spent so much money and time on building out their sophisticated technology, these market makers are able to execute trades at better prices than those available at exchanges.

So what’s in it for the market makers? The likes of Citadel make money on what’s known as the spread. Essentially, if you’re buying a stock, say for $10 dollars – market makers will sell it to you for $10.50 (FYI these are just arbitrary figures for explaining the concept), and if you're selling a stock for $10, they’ll buy it from you for $9.50. Typically the spread is much lower but you get the picture.

Now for Robinhood, because it’s routing these trades to them, market makers will give it a cut of the spread. So going back to our example, if the spread was $0.50, Robinhood gets a kick back, say $0.10 (again this is an arbitrary example – in reality the spread is pennies). When put together then, order flow is the transactions the likes of Robinhood send to market makers to execute, and payments for it are what it receives for doing that: Ergo payments for order flow.

How important is PFOF for Robinhood?

Well as it stands, it's near enough the be all of Robinhood’s business: It accounts for more than 75% of its total revenues. And that’s how Robinhood is able to offer commission free trading – if you’re not paying for the product… As the chart below shows Robinhood is far from the only one that accepts PFOF. 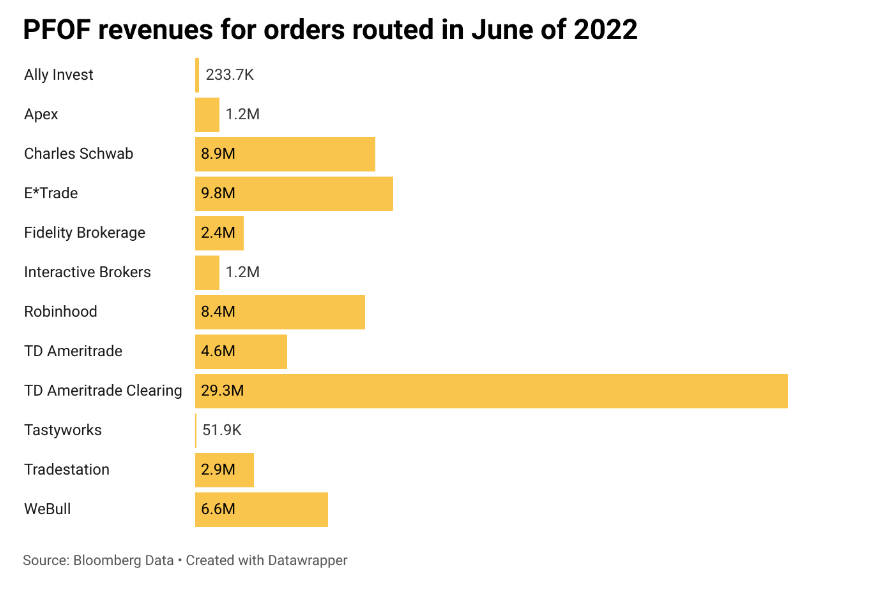 The difference though is that PFOF plays an outsized role for the fintech. Data from Q1 2020 (a raft of consolidation in the market has made it difficult to compare more recent data) shows just how substantial PFOF is for Robinhood relative to its competitors.

So you’re asking why is Robinhood making so much more PFOF revenue than its peers?

Simply put, because its users make way more trades than those using other brokers. Remember the meme stock madness? And that is one of the main reasons why the SEC wanted to push for a ban on PFOF in the first place. If more trades equals more revenue for Robinhood and that creates a lob-sided incentive for Robinhood to push its customers to make as many trades as possible. There is also another major issue with PFOF: It creates a conflict of interest that could see retail customers exploited. Gensler has said as much. This is because rather than sending orders to the best market makers, insofar as execution price for end users, there is a potential for the likes of Robinhood to route those orders to market makers that give them the biggest cut or payout.

While the SECs might have rowed back on a complete prohibition of PFOF, it is still expected to make some changes on how PFOF is conducted. That certainly is good news for Robinhood, given its significant revenue dependence on the model.

But irrespective of what kind of future protections the SEC might unveil, it’s pretty clear that the headwinds are just starting for Robinhood. Its lack of genuine revenue model diversification is truly astonishing: In Q1 of 2021, PFOF accounted for more than 81% of the company’s revenues.

More substantially, the potential for user exploitation – Robinhood has previously been fined by the SEC for causing harm to its users and misleading them – is a major thorn for the fintech. It’s already seen its brand compromised by issues around its conduct, at a time when the company is already facing a challenging economic outlook.

When it emerged, Robinhood came to the forefront on its premise of democratizing financial services. But the reality today is a far cry from those aspirations. A lesson, other fintechs would be wise to learn from. 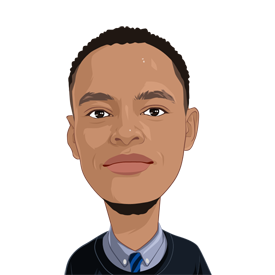